March 12, 2014
I spoke at the West Boca Library in Boca Raton,Florida on “What to know before, during, and after writing a book.”

February 16, 2014
I gave a general talk based on my book “Married Women Who Love Women” at the Emerald Pointe Community in Delray Beach, Florida.

January 26, 2014
My talk was on “Does the author write the book or do the characters,” and on “anecdotes on an author’s journey” at the Jewish Community Center in Boynton Beach, Florida.

January 17, 2014
I conducted a workshop titled “Breaking Down Barriers” at the Silver Threads Celebration in St. Pete Beach, Florida.

October 22, 2013
I did two workshops for Brooklyn College’s Institute for Retires in Pursuit of Education, on on writing and the other related to Married Women Who Love Women.

April 16, 2013
I spoke at Brooklyn College’s IRPE (Institute for Retirees in Pursuit of Education) on What to Know Before, During, and After Writing a Book.

March 28, 2013
Carefree Village, West Coast FL I spoke about my mystery In the Shadow of the Wonder Wheel

Jersey Shore Arts Center in Ocean Grove, NJ on December 4 at 7:00PM. This was a general conversation about how my writing life evolved and I read from my newest book “In the Shadow of the Wonder Wheel.”

Workshop for Silver Threads North called “Finding the Writer in You,” in Rehoboth Beach, Delaware. http://prosuzy.com/?p=1535

May 18, 2012 ~ International Women Artists’ Salon, Hell’s Kitchen Arts Festival
The International Women Artists’ Salon will be participating in the Hell’s Kitchen Arts Festival. This evening, (May 18, 2912) I’ll be reading from my soon to be released mystery “In the Shadow of the Wonder Wheel.” (Old working title was “The Child Taker”). Theater 510, from 7-10PM http://artistsinthekitchen.org/

The ASJA will be having their writers’ conference in Midtown, Manhattan. I will be moderating a panel titled “Photography Basics to Boost Your Bottom Line.”  This panel be held on Thursday, April 26 at 9:00 AM.

January 12-16 2012 ~ I did a workshop called “Finding the Writer in You” for Silver Treads in Gulfport, Florida

The International Women Artist’s Salon is presenting their second annual salon exhibition from November 22- December 4, 2011 at 217 E. 42nd Street (btwn 2nd & 3rd Aves. As one of the participating artists, I will be reading from “Married Women Who Love Women” and talking about “A Writer’s Journey” on Sunday December 4 sometime between 3 and 7 PM.

One of my workshops will be based on my book, A Writer’s Journey: What to Know Before, During, and After Writing a Book and will tell you what to know from finding a place of your own in which to write, to dealing with the mounds of paper that are unavoidable, to writer’s block and on to marketing your published book. It will also cover everything in-between.

Another will be a fun course on improving your photography. We’ll be going on a “shoot” around the campus and then discussing how the photos can be improved with simple composition adjustments. This course is based on the information I picked up will doing stock photography for many years.

The conference will be held at Yale University where forty separate workships will be offered each day. It will be open to all women regardless of professional portfolio.

Please check it out on www.iwwg.org

I’m being interviewed by Melissa Rosati on BlogTalkRadio.com / CreativityMattersNow at 4:30. It is the kind of show that takes live calls so call in with any questions you might have at 626-414-3577. We’ll be talking about the two workshops I will be giving for the IWWG Summer Conference at Yale University (June 24 – July1) .

Two of my art pieces have been selected for inclusion in the juried Art Exhibit & sale to benefit VCS Gay Pride Rockland.  Rockland Center for the Arts: 27 S. Greenbush Rd., West Nyack, NY.

I’ll be doing a book talk on my book, A Writer’s Journey: What to Know Before, During, and After Writing a Book at Bongo, 395 West Street, btwn Christopher and 10th Streets (across street from the Hudson Parkway).

9:00 + mixing and mingling open thru eve

My artwork has been selected to appear in yet another BWAC art show!

I’ll be speaking about my book, A Writer’s Journey, What to Know Before, During and After Writing a Book this Saturday October 30 for the Boston Mensa‘s regional gathering in Boston.

For more information go to bwacgallery.wordpress.com

A Writer’s Journey: What to Know Before, During, and After Writing a Book  ~ Brooklyn Public Library ~ November 18, 2010

I’ll will be teaching two workshops at the International Women’s Writing Guild‘s “Remember the Magic” summer conference at Brown University: one based on my latest book, A Writer’s Journey, What to Know Before, During, and After Writing a Book and the other on How to Improve Your Photography.

I’ll be giving a workshop titled like my book, “A Writer’s Journey: What to know before, during and after writing a book” for the OLOC National Gathering in Cleveland, Ohio.

I will be doing an interview on a program called “Saturday Magazine” on Joy 94.9 FM, Australia’s only full-time GLBTI radio station, this week. I will be interviewed during the section of the show called “Journey”. The presenter referred to my book as “becoming a bit of a bible for women who are married and love women” (wow!) You can listen to the interview here on Friday, November 6th from 7:15-7:55 pm EST. 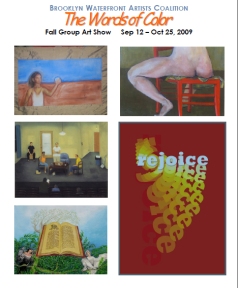 The female form calls to me. I revel in its multitude of colors and textures and have chosen these ten works for BWAC Words of Color Show for just that reason.

In addition to being a painter, I am also a photographer. To make my work more accessible, I’ve photographed my larger scale originals. I call these photographs of my paintings “paint-o-graphs.” These limited edition “paint-o-graphs” work individually ($175) or happily as a collection.  The originals are also available.